Silverdale Residences is accessible through the Doña Remedios Trinidad (DRT) Highway and major roads including the Baliuag-Candaba Road and the Benigno S. Aquino Avenue. Traveling to and from the Metro Manila is also made much easier with the newly opened NLEX-Balagtas Exit.

Silverdale Residences is located along DRT Highway Barangay Tangos, Baliuag, Bulacan. A residential community having easy access to public transportation. A Bus and Jeep can get you anywhere in a short amount of time.

Everything you need is just a short walk away!

Silverdale Residences is located in Brgy. Tangos in Baliuag, Bulacan. This is a first-class municipality with a small population of a little over 145,000 (as of 2015). Since its founding in the 18th century, the growth and development of Baliuag has been slow but steady. It was predominantly an agricultural area in Bulacan wherein rice farming was the main source of living for the people who live here. Aside from rice farming, fruits and vegetables are also grown here that are then sold in public markets in various parts of Luzon.

Over time, commerce and industry became a major component of the city’s economy. The various products that are made and manufactured in Bulacan was being sold in various parts of the country, and some globally. By 19th century, Baliuag was highly thriving and became progressive. In fact, it was the richest town in Bulacan at one point.

To this day, Baliuag continues its growth and remains as one of the key towns in Bulacan. For this reason, it has become one of the destinations for real estate developments such as Silverdale Residences by Prominence Properties. It is now the center for education, entertainment, commerce and transportation in the northern part of Bulacan. It has become a part of the Metro Manila expansion area, which only signals more growth for the town as expansions continue.

Speaking of Metro Manila, traveling to and from Manila if you live in Silverdale Residences is very easy and convenient. There are several public transportation systems that service the area to make other parts of Bulacan or even Metro Manila more accessible. For example, the Baliwag Transit Inc is one of the biggest bus transportation systems in the country. They have service routes to and from Central Luzon and Metro Manila. Hence, you can use this bus system for convenient transport.

If you need to do your grocery or buy supplies you need at home, it is easier due to the proximity to shopping centers and malls in Bulacan. For instance, SM Baliwag is located half a kilometer from where Silverdale Residences is located in. Hence, getting to SM Baliwag will only take you a few minutes. If you are looking for other shopping malls, Puregold and NE Supermarket are also within walking distance from this development.

Just like the malls, the churches and hospitals are located nearby. The Sagrada Familia Parish Church is located within the same barangay as Silverdale Residences. Meanwhile, this site is located near and easily accessible from the main roads and highways like the DRT Highway, Baliuag-Candaba Road, or the Benigno S. Aquino Avenue. If your family is seeking some leisure and relaxation, especially on weekends, there is no need to travel far to get the relaxation you deserve. There are plenty of attractions in Baliuag and in Bulacan such as Mariano Ponce Ancestral House Museum, Baliuag Glorietta Park, The Greenery Events Place, Biak na Bato National Park, and the Malolos Historic Town Center. These attractions provide a wide range of activities that you and your family can enjoy. 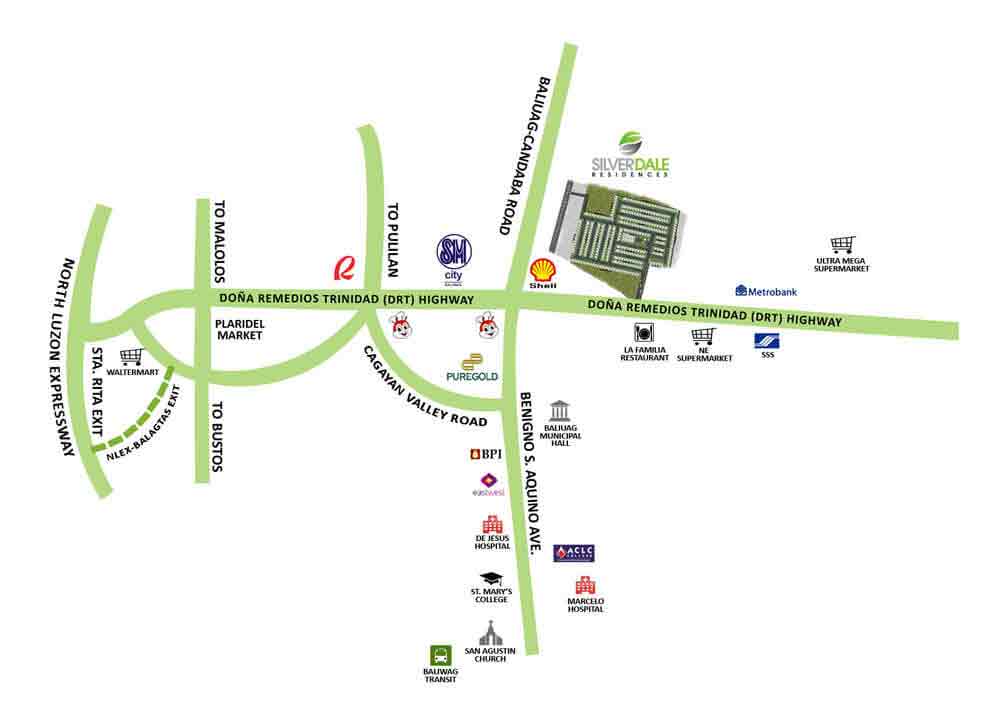